Interview with Airbnb co-founder Joe Gebbia on how a design-led approach to tech can help create connections in a divided world.

How to design a human connection

As we launch into a new year, we sit down with the entrepreneur, designer and co-founder of Airbnb to ask how a more design-led approach to tech can help create connections in a divided world.

Jonathan Openshaw: Design has always been a big focus for Airbnb, where it was quite unusually put on the same footing as tech and engineering at inception – how important was it to the company’s success?

Joe Gebbia: I think it was the thing that made us successful. I studied industrial and graphic design at RISD and Brian [Chesky] had an industrial design background too. Our education had given us the understanding that design was not just about an object or form, but about an entire experience.

So take a product, like a bottle of water, for example – design doesn’t begin and end with the shape of the bottle. What does the brand communicate? Where does the water come from? Where do people encounter it? Is that on the store shelf or in another environment? Where does that first taste happen and what is that experience like? What happens with the packaging when they’re done? The list goes on.

Good design is never a single fixed moment in time, but a long sequence of experiences that take in the big picture. I remember one of the most powerful learning moments I had at RISD was when they took our class to the state landfill so that we could witness this seemingly endless landscape of trash stretching out as far as the eye could see. I think that was probably one of the most impactful moments of my life – it was a brilliant lesson in why responsible design matters. I’ve yet to meet a designer who has the aspiration to make landfills bigger.

JO: So your design education gave you an overarching ethos, but presumably it gave you specific toolkits too?

JG: I think one of the biggest things it taught me was the importance of craftsmanship, and of really sweating the last ten percent. There’s quite a notorious project in the industrial design department at RISD where you’re given a raw block of steel and you have to file it down to a perfect 90-degree angle, with a perfect radius on one side and chamfer on the other. It takes an entire semester of monk-like focus and it’s incredibly labour intensive, and by the end you’re filing things down to the micron, but it really taught us the importance of getting things right. There are some things you can’t rush, but they’re worth doing because it’s going to make the difference between your product getting noticed or it sinking without a trace. It taught me the difference between the effort required to make good design, versus how I define great design – when you satisfy the conscious and tickle the subconscious.

JO: It’s interesting that you learnt that lesson through a physical process, and the result was presumably very clear in the weight, balance and tactility of the final object. But how easily were you able to carry the same mindset across when designing a digital experience such as Airbnb?

JG: I think what I really learnt from that process is that details create trust. What I mean by that is when someone can feel the thought and care that has been put into a beautifully crafted thing, then it reorients their entire experience of that thing. And the opposite is also true – we all know that feeling of ordering a product that looks cool online, opening the packaging when it arrives, pulling it out and suddenly realising that it feels somehow… wrong. Something about the quality does not match the promise that you were sold, and this moment of disappointment pierces the veil. It gets you wondering, hmm, what else did they cut corners on, and suddenly your entire confidence in the brand is undermined. Whereas when a new product arrives and the whole unboxing experience is amazing, and then you have this perfectly crafted thing in your hands, you just immediately relax and know that it will perform in the way you hoped it would. Design execution is the chalice of trust.

JO: Can you think of any examples where really sweating the details paid off in practice?

JG: Absolutely. So in the early days, we faced a big problem: no one was using the site. We knew we had a great idea that the world needed, but we didn’t know why the world wasn’t seeing that yet. So we decided to focus on one city – New York – and see if we could debug things. We only had about 30 hosts in the city at the time so it was a very manageable market, and we flew out there from San Francisco to see if we could find any patterns. It was immediately clear that the issue we were facing was low quality photos of our homes. We had a great product to stay in, but the merchandising was undermining trust. Pictures were blurry or taken at night, so we set about visiting every host offering to help with their imagery – doing a little styling, making sure the lighting was right, using a good quality camera, getting the right angles. Within a week of uploading the new photos, our revenues in New York doubled. This was crazy. It might have seemed like a lot of effort, but the impact was immediate. Eventually, I travelled to Paris to take photos, to Miami, Chicago, Portland, and in every place we discovered that the quality of listings was limiting our growth. This insight grew into an entire photography platform, which still runs today, where we give hosts access to professional photographers. But what was even more interesting is that it became self-perpetuating – by us raising the bar, new hosts coming onto the platform were creating far better imagery themselves, so it became a kind of design-led community.

JO: You mentioned that designing trust was one of your big insights in the early days of Airbnb, and how good design can be used to foster trust between diverse groups of people. Can you say a bit more about how Airbnb was able to design something so elusive?

JG: It was probably our greatest challenge when starting out – how could we create Olympic-sized trust between people who had never met, to the extent that they’d be happy to open their homes to one another. It’s hard to remember how big a shift that was from the vantage point of today, where we’re far more comfortable with Sharing Economy solutions. But back in 2008, it was a completely alien mindset. When you’re faced with a big challenge then you turn to what you know in solving it, and what we knew was design. So the question became: can we design trust? What elements are needed for trust to exist?

I did a TED talk on this back in 2016, and the way I illustrated it to the audience was through ‘the phone experiment’. I asked everyone in the room to take out their phone, and then I asked them to unlock their phone, and then I asked them to pass that unlocked phone to the person sitting next to them. Now you can imagine, the whole auditorium filled with a nervous laughter, and it was obviously a very uncomfortable thing to do. That is how a host feels handing their keys to a guest for the first time. Arguably the only thing more personal than your phone is your home, so in that moment, the whole room understood the challenge we were up against.

JO: So what were some of the concrete ways you went about it – what are the actual features that allowed you to design trust?

JG: It wasn’t one thing, but many things working together. Let’s extend that phone experiment: how different would you feel if, before handing it over, you first got the chance to introduce yourself to your neighbour, get their names, where they lived, hear if they had kids or a dog. And then imagine that they had 150 reviews saying how great they were at holding unlocked phones. How would you feel about handing it over then? So really what we’re talking about here is a well designed reputation system, and that’s at the core of creating trust.

There was a study that came out from Stanford around the same time I gave that talk which looked at people’s willingness to trust each other across age, demographic, gender and location barriers. Perhaps unsurprisingly, they found we’re most willing to trust people who are similar to us. That’s the default social bias. But then something magical happens when you add reputation to the mix – we can trust very dissimilar people if they have a strong reputation.

For Airbnb, we found that nothing really changes if you have a handful of reviews. But if you have more than ten there’s a tipping point where high reputation beats high similarity. Our design allowed us to create this reputation system, creating connection across social barriers. Good design gives people confidence – it’s as simple as that.

These insights have probably come to their greatest fruition through Airbnb.org, our non-profit arm that focuses on initiatives such as rehousing refugees. Here, we’re adding in a whole load of extra variables that could potentially undermine trust, and yet what we’ve seen is that people are very willing to help each other given the right system. I absolutely don’t think Airbnb.org would have been possible without our years of experience in designing for trust – Airbnb acted as the trampoline that made this next level possible.

good design gives people confidence – it’s as simple as that.

JO: In many ways, it feels like the world has never been more divided, with people entrenching around ever more incompatible world views. But given the right system, you’re saying that a natural generosity can exist between people?

JG: We’ve found ourselves in a swirl of misinformation and a pandemic of loneliness. Our little bubbles follow accounts that reinforce our ideologies and conveniently position them against the ‘other’. I’d posit the quickest way to reconcile incompatible world views is to seek understanding between those holding them. I bet what opposing sides would realise is that we’re all more the same than we are different – after all, only 0.1% of our genome differs from anyone else’s. I think underneath the surface of any discord is the knowledge that we have to work together to get by. We have to learn to work together better because the challenges we face need large-scale cooperation – by the end of the century, some estimate we’ll need more than two Earths to sustain ourselves. That’s how fast we’re burning through resources, and we’re already in 2022. We’re really running out of time to figure these things out. So instead of the internet dredging deep crevasses of distrust, what if we intentionally redesign these systems to bridge understanding with one another? What if we use design to expand our worldviews, rather than bind them in place?

The Power of Design™ is Camron’s own platform that celebrates the forces, people and brands that create impact using design in innovative ways to shape life today and tomorrow. 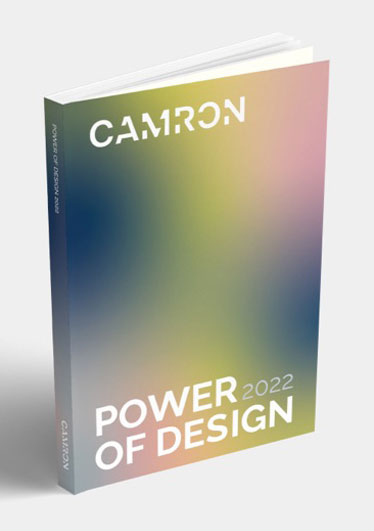 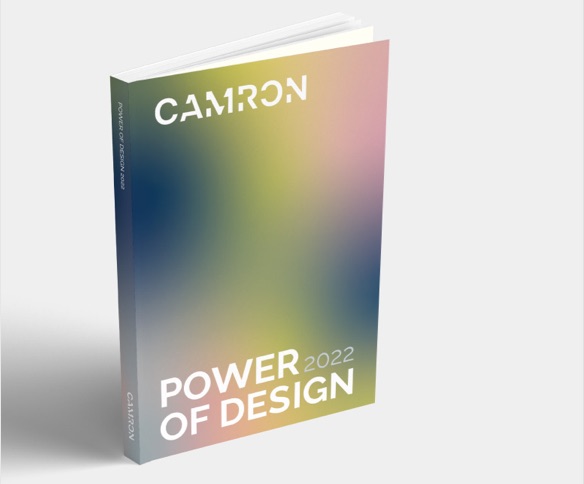 The Power of Design™ is Camron’s platform that celebrates the forces, people and brands that create impact using design in innovative ways to shape life today and tomorrow.

Design is the cake, not the cherry

Having worked with some of the biggest brands on the planet, marketing and communications guru…

The maverick ventures reinventing industries where sustainability is designed in from the start.